The Other day we played an Awesome game of #DnDNext with the Number one GM that Is @Greywulf over on the G+ hangout. The usual Dungeons & Dragons characters came out to play. We had elements of at least three other systems thrown In.  Some Call of Cthulhu  monsters.  Some, well I can not really remember what went In to It but what came out was Awesome and well, that Is what has inspired me on my day off to draw these. I played Wel-Mah who was Velma’s twin only because two players wanted to play the same character In this Role-playing extravaganza

When Given the freedom as we have with our Online GM to take a game In the way that an #RPG should go and be played then FUN Is the name of that game. So here for you to consider is The Doo Gang. 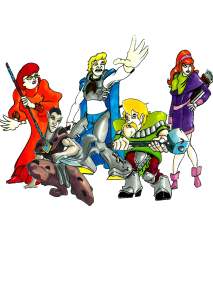 Will do anything for a Scooby Snack